Ukraine and inflation - a crisis within a crisis

Ukraine and inflation - A crisis within a crisis

Why are costs rising and what’s the 2022 outlook?

Prices were rising quickly before Russia’s invasion of Ukraine. The late 2021/ early 2022 cost-of-living crisis was, in its simplest terms, a perfect storm of pandemic-era demand, strained supply chains and rising commodity prices.

Yes, there’s more to it than that – Covid concessions, escalating labour costs and banks being sluggish in managing the situation – but the punchline is that household bills were way up at the break of the year [1].

War in Ukraine put a bad situation into a nosedive.

Russia is the world’s largest exporter of natural gas and second largest exporter of crude oil.  And while the UK relies on Russia for only 6% of our oil and 5% of our gas, Europe is trying to lessen its near-50% reliance on Russian fuel.  With nations competing to buy it from elsewhere, demand has shot north and taken prices with it [2].

As business overheads in sourcing, storing, manufacturing, cultivating and transporting goods go up, the costs are passed down the chain - to the consumer, ultimately.

We’ve seen rising prices hit hard on our shopping bills because, in food, there’s a bit of a double whammy going on.  Few of us appreciated or probably even knew that Ukraine’s nickname is — or at least was — the ‘breadbasket of Europe’.

The country is a primary producer of cereals, such as maize and wheat, as well as other grains and sunflower oil.  In basic terms, Ukraine manufactures / manufactured ingredients that go into so many of our food basics.  For that matter, so does Russia.

Brits might try to find solace in the fact we produce 90% of the wheat products we consume, but then fertiliser costs have rocketed, as that too is one of Russia’s biggest exports. The BBC reported in April, that fertiliser per tonne has more than doubled in cost - from £350 to £900.

As well as fuels and fertiliser, UK manufacturers are also paying extra for equipment and materials. Why? It’s getting tedious now, but Russia is one of the world’s main exporters of metals: aluminium for food cans, copper for wiring, nickel for components and lithium for batteries.  A whole swathe of goods and raw materials; required in everything from car manufacturing to tech, engineering and even DIY projects are affected [3].

Once again, sanctions mean countries are sourcing raw materials from elsewhere. Swollen demand stretches supply and jacks up prices. The struggle for households, and the potential for inflation to rise to double digits, is very real. 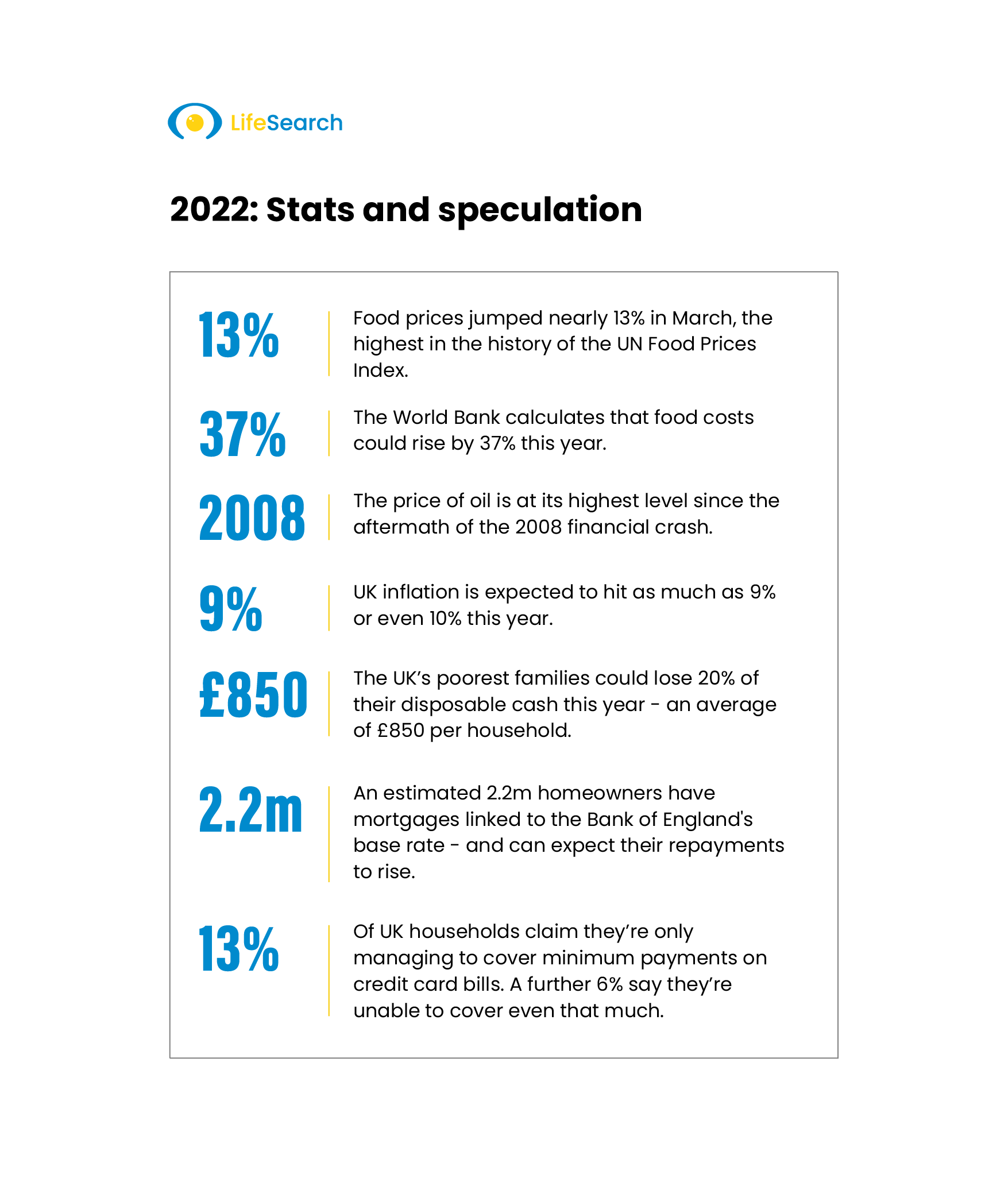 Not good.  According to the UN Food Prices Index, current rates are at their highest since records began 60 years ago. Food prices jumped nearly 13% in March, following already record highs in January and February.

A fortnight into the conflict and the price of oil had jumped to its highest level since the financial crash of 2008 [4].  It’s hard to see fuel costs heading south in the near future.

Some economists suggested that the UK’s current trajectory could lead to a cost-of-living crisis not seen since records began in the 1950s. [5]  Inflation is expected to hit as much as 9 or 10% this year [6].

Rising inflation will force further rises in interest rates (to as much as 2%) and an estimated 2.2m UK homeowners – who have mortgages linked to the Bank of England's base rate – can expect their monthly repayments to increase.

Crisis within a crisis

The World Bank calculates that food costs could rise by 37% and, inevitably, it’s the poorest who’ll be impacted most. In March, the Guardian reported that the UK’s poorest families could lose 20% of their disposable cash this year - an average of £850 per household.

Some 13% of UK households already say they’re able to cover minimum payments only on their credit card bills.  A further 6% say they’re struggling to cover even that much.

Obviously, Brits aren’t alone in feeling the squeeze. In April 2022, World Bank Chief David Malpass said the war in Ukraine in the aftermath of the pandemic is “a crisis within a crisis” for much of the world [7].

As citizens at home and abroad struggle to make ends meet, they’ll be faced with excruciating choices. To quote a newspaper headline: ‘Many UK households are facing the impossible choice of food or fuel’ [8].

The worst part…that was written back in January.

The release of pent-up demand

Through 2021, we dissect how it looks when pent-up demand is released after 12-months-plus of retail restraint.

One in 10 UK adults ‘microdosed’ during the pandemic

Lighting up is still a daily ritual for an estimated 7.2m UK adults, while 3.6m more of us vape
Read more