Suicide is a major public health issue, both in England and globally. Close to 800,000 people across the world* die to suicide every year; people of all ages and all walks of life. Not only this, but evidence indicates that for every one of those 800,000 adults who die by suicide each year, there may have been 20+ people attempting it.

Pretty chilling statistics, right? For someone who has never experienced suicidal thoughts and feelings, it might seem like a completely alien concept and be difficult to understand, but the problem is very much real and it’s not going anywhere. In fact, deaths by suicide rose by 10.9% in the UK** in 2018. You’ve probably also heard the shocking statistic that suicide is the single biggest killer of men*** aged under 45 in the UK. 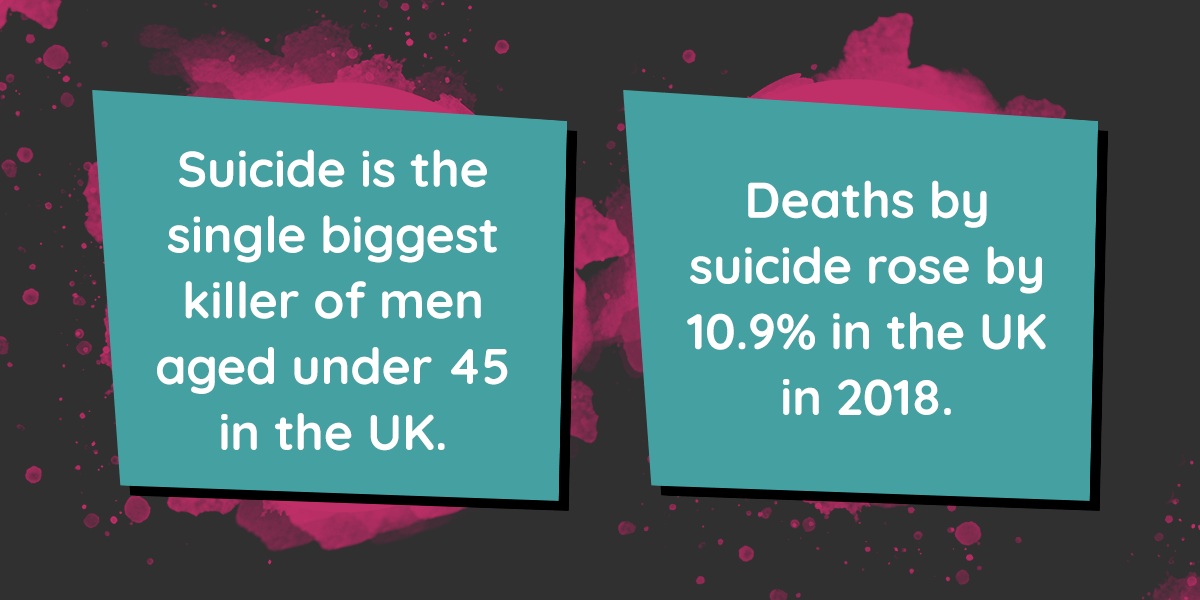 Suicide and life insurance can be a tricky thing to navigate. Insurance is designed for you or your beneficiaries to fall back on in the event of accidents and unforeseen circumstances, which puts suicide in a bit of a grey area…

The conversation around mental health has been growing and picking up traction for years now as society tries to tackle the stigma that prevents people from speaking out and accessing the help they need. Knowing that admitting to and tackling a mental health issue could prevent an individual’s ability to take out a life insurance policy only feeds into the overall problem. With that in mind, many life insurance providers have changed their stance on paying out in the event of suicide.

It’s still fairly common however for suicide claims to be turned down by a provider due to non-disclosure (when the policyholder withholds crucial information during the application process) about the mental health of the person with the policy. The same can be said when an undisclosed alcohol, drug or a smoking dependency contributes to the death of the policyholder.

When you take out life insurance, you are asked to disclose any information you have about your physical and mental health that would impact your policy. It can be really difficult to be open and honest about mental health but if you’ve suffered from anxiety, depression or any other mental health condition in the past then it’s really important to disclose this to your provider.

You should be prepared for the possibility of being asked:

You may also be asked:

For the sake of your policy validity, it’s always better to be honest and risk perhaps paying a little more per month in premiums than let any issues go undetected by your provider. 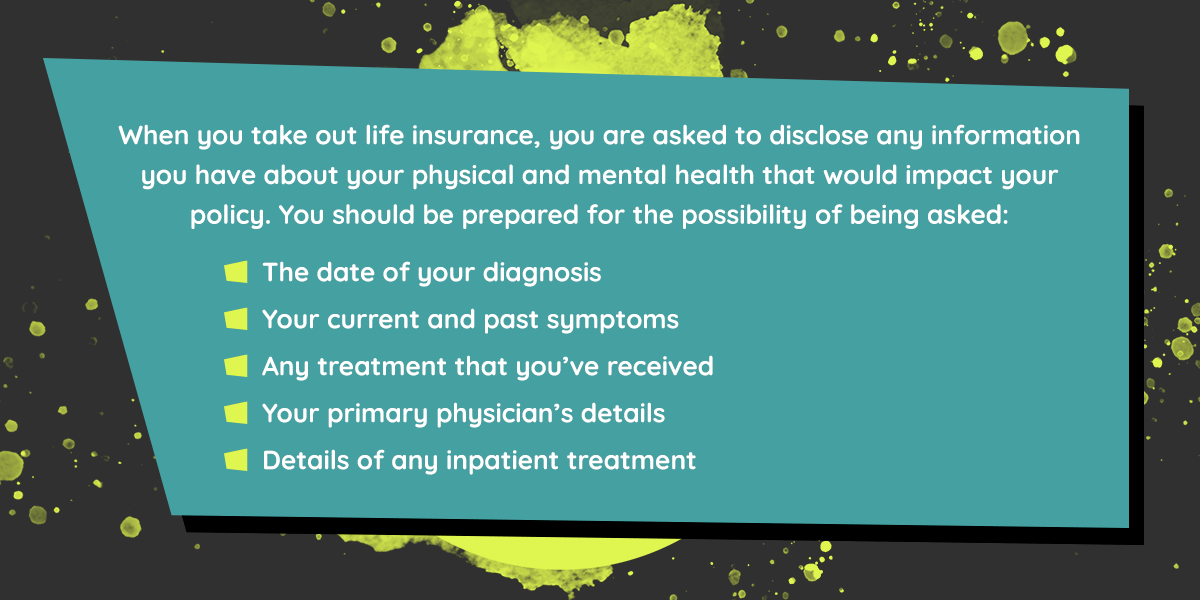 Sam Nathan, a Retention Adviser at LifeSearch says, “For those who are apprehensive about discussing private matters such as mental health, I encourage my customers by letting them know firstly that it is confidential. And secondly, whatever it is, it won’t be the first time that I’ve heard it. All I want to do is find the right insurers who can help you. There doesn’t need to be a stigma around this stuff - we need to talk about it more. The male suicide rate is an epidemic we really need to address.”

Although it’s not all that common these days, some policies will include a ‘no suicide’ element. This is pretty much what it says on the tin - under no circumstances will a pay out be made if the policyholder commits suicide. This is a somewhat controversial stance as the conversation around suicide and mental health moves to the forefront of society, but it’s certainly not unheard of.

All in all though, past suicide attempts or mental health should never be a barrier to life insurance. Admittedly, it can be a bit of a hurdle but nothing that cannot be overcome with the help of a broker, like us here at LifeSearch.


Lisa Jones, Client Care Leader at LifeSearch says, “It may mean increases in premiums, but insurers always aim to offer cover for mental health sufferers. Nowadays, most insurance companies will try and pay out. They bring panels together to determine what is the fairest thing to do, case by case. I experienced a case not long ago where a gentleman had commited suicide and his wife was dealing with the claim. It turned out that he hadn’t told us or anyone else about his mental health issues. The insurer decided that the policy would probably have been declined from inception but they took a human stance and paid out a proportion as they felt it was the right thing to do.”

Life insurance and the suicide clause

It doesn’t seem fair to leave beneficiaries without a much-needed pay out in the event of suicide right? Of course not, but there is a reason why suicide deaths are treated with some caution in the life insurance industry. Providers need to both protect themselves against people obtaining large policies and then proceeding to take their own life in order for their family to receive a big pay out, and to protect these vulnerable people from choosing suicide as an ‘easy’ option to secure their family a pay out. 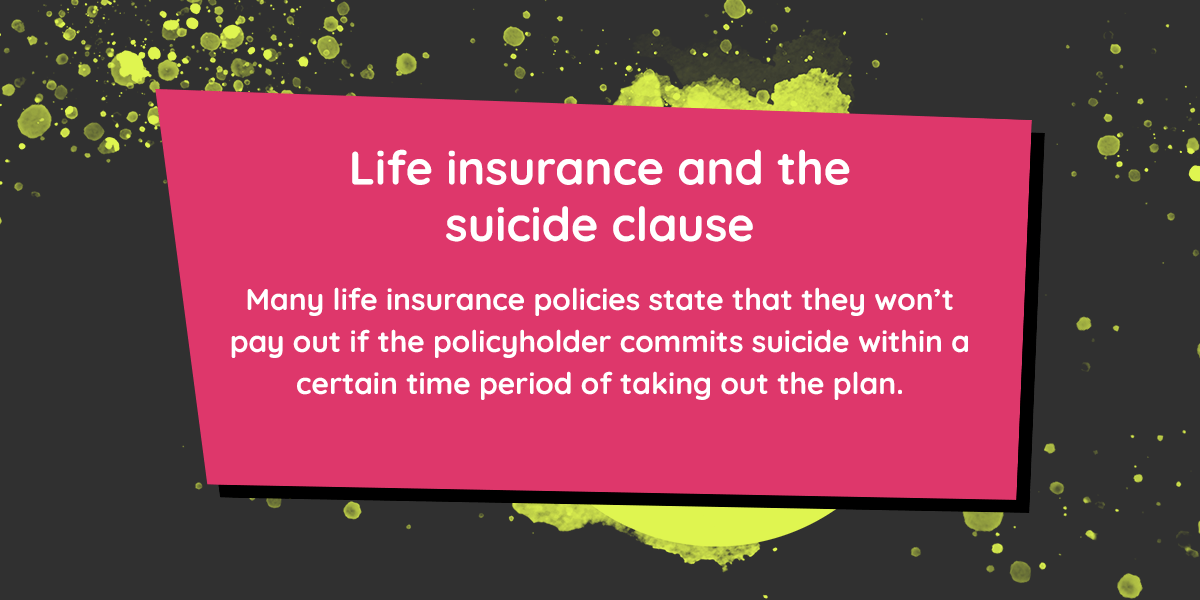 To prevent this, many life insurance policies state that they won’t pay out if the policyholder commits suicide within a certain time period of taking out the plan, but they will pay out after this initial period is up. This is usually two years, but it can also be 12 months depending on the provider. There are also occasions where even if suicide is committed within the period stated by the suicide clause, insurers will refund the premiums that have been paid to date, so it’s always worth a beneficiary contacting the insurer to check their stance on this, rather than just assuming that the policy won’t provide them with a penny.

It’s also important to be aware of the contestability clause, otherwise known as the contestability period. This refers to the period of time at the beginning of a policy in which an insurer can investigate the death of a policyholder. It gives the provider the chance to determine whether the policyholder had withheld any information that could have contributed to the cause of death.

Let’s use cancer as an example. If the policyholder passed away of lung cancer, the provider may approach the deceased's GP to access certain elements of their medical records, to ascertain if this person was a smoker or for indications of substance abuse. If this is the case and this information was not disclosed during the application process, the insurer can choose not to pay out. The same process can be - and often is - applied to a suicide to work out whether there were any contributing factors such as mental health issues that should have been disclosed to the insurer.

Will a suicide attempt invalidate my life insurance policy?

So, how does it work if a person has an existing life insurance policy and they attempt to take their own life? Would this invalidate their policy? 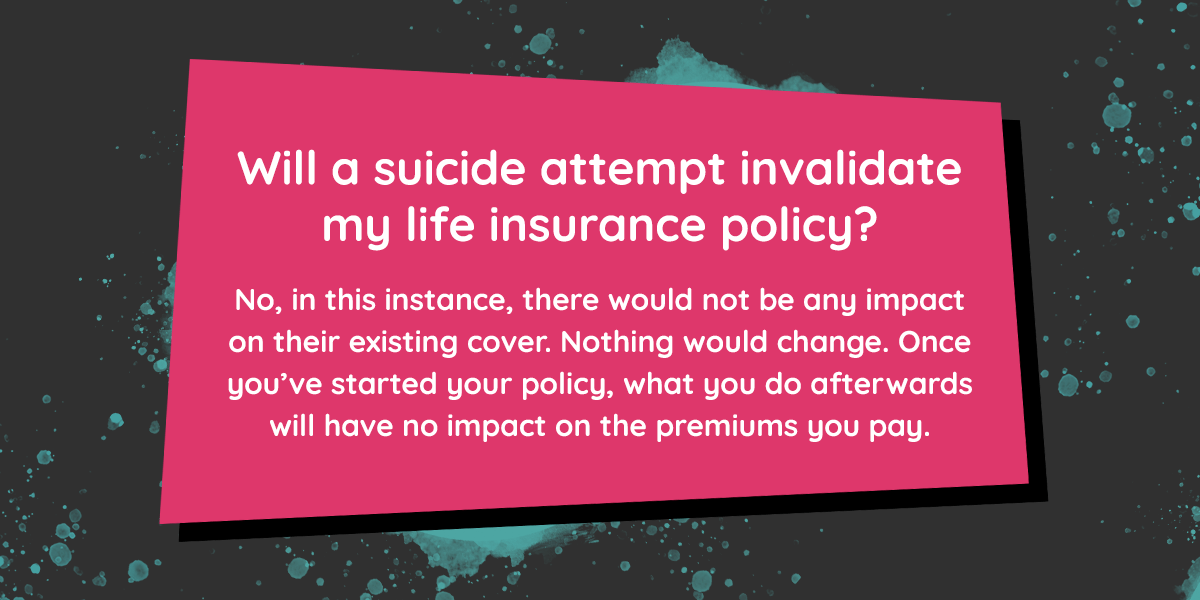 No, in this instance, there would not be any impact on their existing cover. Nothing would change. Once you’ve started your policy, what you do afterwards will have no impact on the premiums you pay. This is because an insurer cannot alter the terms of the policy once it has already been put into force; it just doesn’t work like that. They set their pricing once they’ve underwritten the application, which is why you’ll sometimes get an increase in premiums for things like mental health disclosures at the time of applying.

Will a previous suicide attempt stop me from getting life insurance?

It’s a slightly different story if someone has a previous suicide attempt in their history when taking out life insurance. Although it certainly makes it more difficult to get a life insurance policy however, insurers are becoming more tuned in. Five years ago perhaps, you might have found it near enough impossible to get insured with a past suicide attempt on your records. Now though, it’s not quite the enormous barrier it once was.

When anyone applies for life insurance, a provider will want to get an idea of their mental health and address the severity of any issues they may have experienced or currently be experiencing. Even something as common-sounding as anxiety can still have a profound effect on someone. If someone has previously had one or more suicide attempts, has had in-patient treatment for suicide attempts or suicidal thoughts or has seen a psychiatrist in the past as opposed to a GP or counsellor, this is usually a case that will require more work and attention than usual.

The application will most likely go through a manual underwriting process, and the details of when the attempt took place and any treatment which has been received since will all be taken into account. This information will then be used to calculate the monthly premiums based on the level of risk the insurer believes the policyholder poses.

If the prospect seems a little daunting and you want some help navigating the market, we recommend that you discuss your requirements with an expert adviser. Turn to us here at LifeSearch, and we’ll help you seek out the perfect cover for that all important peace of mind.

For more than 20 years, we’ve been providing life insurance policies to people in all sorts of different situations - and today we’re still at it. We know where to turn to find you the right insurance policy with the right provider. We’re always here to answer questions, give fee-free advice and walk alongside you if you need to make a claim, so give us a shout and let’s get to know each other.