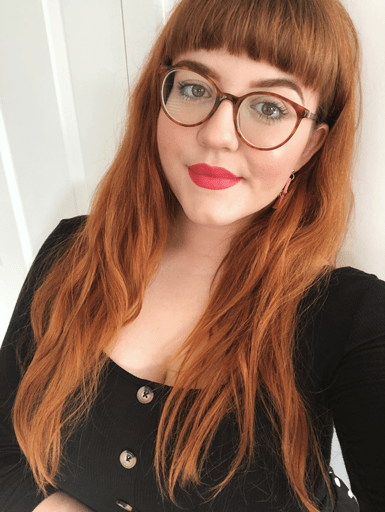 I’m Zuky, I’m 24 and I live in Northamptonshire with my partner Owen and dog Mabel.

By day I’m a LifeSearcher and by night I love to read. A few years ago I started a book review blog and Instagram channel which has grown into a bustling community of several thousand book bums. The project has allowed me to connect with new authors, books and readers all over the world.

Reading and books are my passion. Let’s just say exercise is not …

I’m not unhealthy. Until recently I didn’t have any major worries or concerns on that front. But two years ago I had a bit of a wake-up call when I was diagnosed with Polycystic Ovary Syndrome (PCOS).

PCOS is a hormonal condition that, among other things, affects women’s menstrual cycles. It’s a fairly common condition, affecting about one in ten, but it can lead to a range of complications down the line.

My diagnosis has forced a rethink. It’s now on me to pay more attention to my health and to tune into my mind and body so I can stay on top of my condition and its symptoms.

Coaching women is Baz Moffat’s bread and butter so I’m massively excited about working with her. Although Baz is an expert in female health, she’s a former professional athlete who represented Team GB rowing … and I need some of that drive and ambition to rub off on me.

Motivation … hand on heart that’s the bit I struggle with.

I’m good at joining gyms, I’ve signed up for several in the last few years. But the experience follows a predictable pattern: I go full pelt for the first few weeks or months. On one occasion I kept it up for half a year. I felt great, I saw and lived the benefits of being in decent shape …

Then the excuses began. I’ll have a diary clash so I swerve a session. I create a diary clash so I have excuse to swerve another session. Before you know it, the idea of going back to the gym is horrible. A fortnight passes, a month passes … after six weeks I resent paying for it and I cancel.

During lockdown the pattern repeated. I settled into a decent yoga routine - I was doing it nightly - and really enjoying it. Then the excuses started, and the habit tapered off.

I think my struggling to stick with exercise, at least in part, dates back to school. As a child I had asthma so some of these habits never took hold. I did try to engage with sport but I always felt I had to work twice as hard as everyone else. By the time I was a teenager, I was avoiding sport and activity as much as I could get away with.

But avoiding it isn’t any longer on the cards. In recent days I’ve started to notice – whether it’s linked to PCOS or not – that I’m constantly tired and lethargic, lacking energy and suffering more aches and pains than I probably should.

I know it’s time for me to get a handle on exercise and healthier living, so (I think) I’m ready to embrace working with Baz to tune in, and tune up!

LifeSearcher Zuky is on a quest to improve her health. Following on from the LifeSearch Health Wealth & Happiness report we have paired Zuky up with Former GB rower Baz Moffat.

Baz will be working with Zuky over 3 months to see what changes she can put in practice to help achieve her goals.